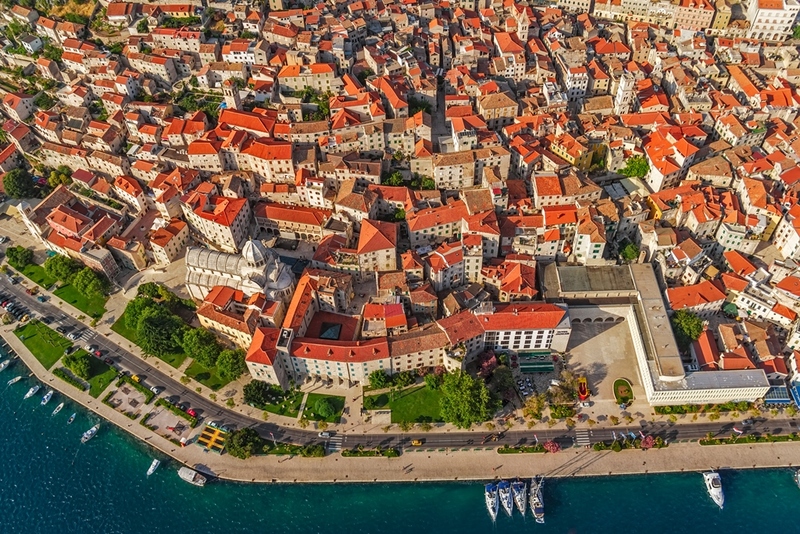 Open gallery
Close gallery
On the first day, you’ll have a few important tasks: accept the yacht, settle on board, and check up the equipment. After that, you can enjoy some leisure time and take a walk in Sibenik, enjoying its picturesque sights and stopping to try local cuisine.

Sibenik
One of the most fascinating cities of Dalmatia, Šibenik, is already more than one thousand years old. The banks of the Krka River, royal origin, unbelievable beauty of local architecture, gentle sandy beach – all contributors to its permanent success with tourists. The Cathedral of St. Jacob subtly combines Gothic motives and features of the Roman style and is decorated with 74 stone busts of contemporaries of Juraj Dalmatinac (Giorgio Orsini). A wonderful view of Šibenik and the Adriatic Sea opens from the walls of the Saint Ana Fortress. You should definitely visit the Krka National Park, beaches on the Solaris Cape, and the thalassotherapy center with its six swimming pools and therapeutic mud. In summer, the city is filled with music during various festivals or medieval fairs.

Primosten
The name of Primošten, meaning “connected by bridge” became the city name because of its location. The settlement, surrounded by walls and towers, was located on a separate island and connected to the mainland by a drawbridge. The dominant architectural construction of the city, the Church of St. George, rises above narrow streets and houses built from white stone and tiled roofs.

But Primošten isn’t famous for the housing development. Rather, it’s the beaches (having the international Blue Flag award), flower decorations (the title of the Golden Flower of Europe) and Babić wine (vineyards are in line to join the UNESCO World Heritage List) that bring fame to the city. They catch and serve spiny lobster “La Primosten” in local restaurants for fans of gastronomic tourism to enjoy.