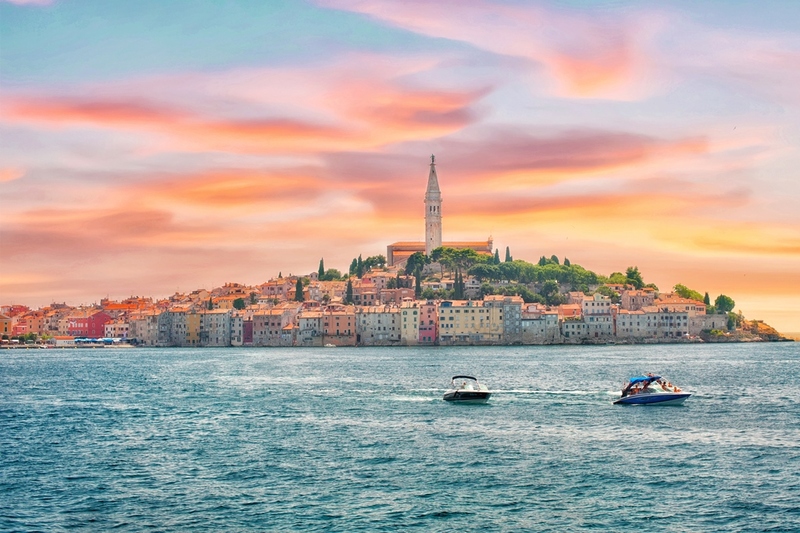 Open gallery
Close gallery
Rovinj is a wonderful place to start your trip over Croatia. On the first day, you’ll have an opportunity to see the best-known sights of the city, but arrival at the marina will be the main event. Be sure to discuss the route with the manager and check the weather forecast.

Rovinj
The archipelago of 22 islands, the most beautiful of which are the islands of St. Andrew and St. Catherine, surrounds picturesque Rovinj. Traditional tiled roofs, narrow paved streets, galleries and artists’ studios make this a fairytale place in Istria-- an original Croatian Venice. Here you should see the Cathedral of St. Euphemia and its 62-meter bell tower, which is clearly visible from any point in the city.

After that you should try local ice cream on the embankment, and go to the Mexican restaurant for dinner, where the level of light-heartedness and relaxation will reach an all-time high as guests eat there while lying in hammocks. Keeping the weather forecast in mind, do not forget an interesting city saying: “while clouds are gathering above the neighbouring cities, sun is sure to shine in Rovinj.”

Pula
Pula is nearly always the starting point of trips over the Istria peninsular. Here you can start familiarizing yourself with natural, cultural, and gastronomic sights of Croatia. The beauty of this city lies in its contrasts. Today’s buildings alternate with Ancient Roman monuments; Venetian architecture is added to the industrial port landscape. There are no high mountains here, but there is a quiet bay; no long sandy beaches, but a resort city status. Pula gives tourists a unique opportunity to be transferred several centuries back “here and now.”

The best route by which to familiarize yourself with all Pula sights starts from the Triumphal Arch of Sergius. It then sprawls along Sergijevaca Street and leads to the Forum – the main square of the Old Town. The Roman Temple of August, the City Hall, and the Cvajner Gallery, a very popular place where the cultural life of the city is concentrated, are located here. Now we turn to the right and practically in one hundred meters find ourselves by the Pula Cathedral built in place of the Temple of Jupiter. After that, you can go to the top of the hill and see the Venetian Fortress. A fine view of the city and bay opens from there, and you’ll also see the main gem of Pula, which we left for the “dessert” – the wonderfully preserved Ancient Roman amphitheater.

The Arena built in the 1st century A.D. saw gladiator combats and knight tournaments; today it’s a concert and festival venue. After the extensive walk over the city, leave some strength for the gastronomic part of the route. They serve well-known Croatian specialties in local restaurants: truffles, wine, and rakija. If you want fresh seafood, it’s better to turn back to the port in order to accompany dinner with a wonderful view of the sea and yacht harbour.