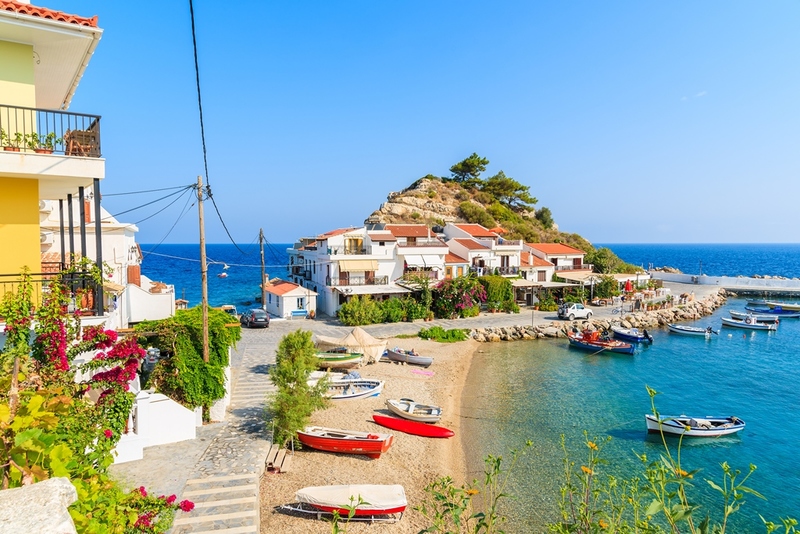 Open gallery
Close gallery
On the first day, you’ll have a few important tasks: accept the yacht, settle on board, and check up the equipment. After that, you can enjoy some leisure time and take a walk in Samos, enjoying its picturesque sights and stopping to try local cuisine.

Samos
The island of Samos in the Eastern Sporades dazzles its visitors with an abundance of diverse landscapes, its fusion of daily serenity and bustling nightlife, and its combination of developed infrastructure and ancient Greek landmarks. Mountains plunge straight into the sea, where steep cliffs give way to exquisite pebble beaches.

Today’s Samos has managed to preserve many amazing sights, some of which have been listed as UNESCO World Heritage Sites: the ruins of Pythagoreion with its fortified walls, aqueduct, and shrines and temple to the Goddess Hera at Heraion. Anthony and Cleopatra’s palace was found here at one time.

The island’s largest and most important cities formed in its coastal areas. Its present-day capital and main port is the city of Samos, although an eponymous marina is located in the southeastern part of the island, just 500 meters from the village of Pythagoreio. The second-most popular yachting port is found to the west of Samos in Karlovasi.

Arkoi
The island of Arkoi is situated in the Eastern part of the Aegean Sea and forms part of the Dodecanese. It’s home to just 50 people, and tourist infrastructure is mostly undeveloped. Nonetheless, the island can offer you the ruins of an ancient acropolis, Tiganakia bay (the “Blue lagoon”), Patelia port, and Limnari bay.

Leipsoi
The name “Leipsoi” belongs both to a whole archipelago in the Aegean Sea, as well as to its largest and only populated island. Leipsoi’s landscape is similar to that of neighbouring Patmos and Leros with mountainous, rocky locales, a shoreline dotted with coves, and pristine, secluded beaches. There’s just one city here, also called Leipsoi. You’ll find it nestled along a convenient bay, perfect for mooring yachts. The depth is more than enough for free navigation.